At the end of the year our second RL2 manuscript 'Interplay Between Mitophagy and Apoptosis Defines a Cell Fate Upon Co-treatment of Breast Cancer Cells With a Recombinant Fragment of Human Κ-Casein and Tumor Necrosis Factor-Related Apoptosis-Inducing Ligand' has been accepted in 'Frontiers in Cell and Developmental Biology '. Congratulations to Fabian and Max, as well as our cooperation partners.

Another of our manuscripts with the title ''Pharmacological targeting of c-FLIPL and Bcl-2 family members promotes apoptosis in CD95L-resistant cells" has been accepted for the publication in 'Scientific reports'.
Congratulation to Corinna, Laura and Nikita Ivanisenko.

Our joint manuscript 'The Recombinant Fragment of Human Κ-Casein Induces Cell Death by Targeting the Proteins of Mitochondrial Import in Breat Cancer Cells' has been accepted for the publication in 'Cancers'.
Congratulation to Max, Fabian and all our cooperation partners.

Another of our manuscripts with the title 'Dissecting DISC regulation via pharmacological targeting of caspase-8/cFLIPL heterodimer' has been accepted in 'cell death and differentiation'.
Congratiulations again to Laura and Nikita Ivanisenko.

Our manuscript  'Long and short isoforms of c-FLIP act as control checkpoints of DED filament assembly.' has been accepted in 'Oncogene'.
Congratulations to Laura and our cooperation partner Nikita Ivanisenko.

Our whole group took part in ECDO conference 2019 in Dresden. We have presented 5 posters and one invited talk.

We are delighted that the publication from our group has been highlighted at the Cover Image of the International Journal of Cancer:
https://onlinelibrary.wiley.com/doi/abs/10.1002/ijc.31691
Congratulations to Laura!

Corinna Koenig has won a fellowship from ECDO organization to attend the 27th ECDO conference on Cell Death.
Congratulations to Corinna!

Our group took again an active part in the 'Long night of Science' and we informed many interested visitors about our research. Furthermore, Max Richter has given a talk "Programmed Cell Death- live and let die".

Our cooperative manuscript 'Targeting RIPK1 in AML cells carrying FLT3-ITD mutation' has been accepted in the international Journal of Cancer.
Congratulations to Laura!

The organization of the trilateral Symposium has been highlighted by press release at Medical Faculty and Gesundheit-Sachsen-Anhalt:
http://www.med.uni-magdeburg.de/pressemitteilungen.html
https://www.gesundheit-sachsen-anhalt.de/de/wissenschaft/trilaterales-symposium-in-magdeburg-20058409.html

Our group has run a trilateral Symposium 'From molecular-genetic networks to translational medicine', which was supported by Volkswagenstiftung. The symposium was attended by scientists from Germany, Ukraine, Russia and representatives of International affairs Office of DFG.

Our rational molecular probes design story by Ivanisenko N.V., Buchbinder J.H. et al, 'Delineating the role of c-FLIP/NEMO interaction in the CD95 network via rational design of molecular probes' is accepted for publication in BMC Genomics.
Congratulations to all co-author

In the frames of the GBM-CDS minisymposium for the GBM-Master Prize for Corinna König, Corinna has given a lecture 'Targeting apoptotic pathway'. It was followed by the talk of Prof.Dr. Dirk Brenner, Luxembourg Institute of Health,'cROSroads between T cell function and metabolism.' 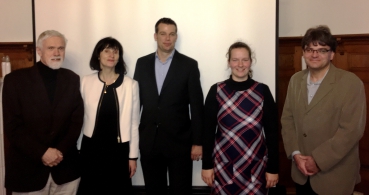 Our group has served as one of three key organizers the 26th ECDO (European Cell Death Organization) conference 'From small molecules to translational medicine' in Saint-Petersburg, Russia.

Laura has given a talk 'Dissecting extrinsic cell death pathway via imaging flow cytometry' at ECDO2018.

Max has given a flash talk and a poster presentation 'Recombinant analogon RL2 of human κ-Casein induces cell death in breast cancer cells'.

Our cooperation partner Nikita Ivanisenko and Laura Hillert made a major contribution to the special ECDO 2018 announcement in the Nature group journal Cell Death and Differentation. This editors' pick highlighted a special focus of the meeting: small molecules. https://www.nature.com/collections/lqbxphbdjr/

Corinna König has received the "GBM Master Award of the OVGU" from the Society for Biochemistry and Molecular Biology. We congratulate Corinna on receiving this honorable Award and her graduation, and welcome her as a new PhD student in our group.

Our two cooperation manuscripts with Dennis Pischel and Robert Flassig on modeling cell fate in single cells are accepted on Plos and Plos Computational Biology.
Congratulations to Jörn!

We took part on the 'Firmenstaffellauf' in Magdeburg, together with Hannes Bongartz and Heike Rummel as team 'FASt Blotters'. Our team was able to run the 5 x 3km in 1h 16 min and 45 sec and finished on place 137. 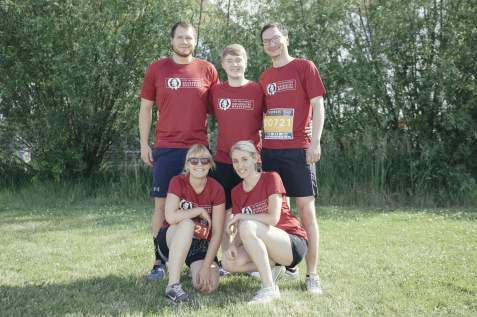 Our group took an active part in the 'Long night of Science 2018'. Max Richter has given a talk "Programmed Cell Death- live and let die".

Due to a severe storm the company running competition "Firmenstaffel Magdeburg" started one day later this year. Our spontanously reassembled team was able to run the 5x3 km in 1h 14 min and 38 sec and finished on the good 84th place in the mixed category.

We thank our DAAD visitors 2016: Clara Wolfe (USA), Gelina Kopeina (Russia) and Alexey Zamaraev (Russia) for their great contribution  to our projects!

We participitated the third time in the company running competition "Firmenstaffel Magdeburg" and were able to finished on the 126th place in the mixed category.

Sabine gave a talk with the title "Life/death decisions in death receptor networks: new technologies and combinatorial treatment of pancreas cancer cells with gemcitabine and CD95L" at the CDS Progress Meeting.

We took part in Lange Nacht der Wissenschaft. Jörn has given a talk " Progammed Cell Death - Live and let die"

Our manuscript “Parameter identification using stochastic simulations reveals a robustness in CD95 apoptotic response" together with Dr. Christoph Zimmer (Yale School of Medicine; USA) recently published in Molecular Biosystems has been nominated to be a part of HOT article collection on Molecular Biosystems  website. HOT article collection presents the top papers published in the journal.

Laura was at the EWCD and gave a presentation with the title "Evaluation of apoptotic target molecules for clinical therapy".

Jörn gave a talk with the title "Imaging flow cytometry as a tool to understand life/death decisions and get new insights into death receptor networks" at the CDS seminar.

Our collaborative project with the group of PD Dr. Ildiko Dunay "Chronic Toxoplasma gondii infection enhances β-amyloid phagocytosis and clearance by recruited monocytes" has been accepted for publication in Acta Neuropathologica Communications. Congratulations to Sabine!

Sabine gave a talk with the title "Imaging flow cytometry as a tool to understand life/death decisions in death receptor networks" at the 1. Science Days of ÖGDV in Bad Aussee, Austria.

Laura Hillert gave a talk with the title "Towards understanding cell death regulation in AML" at the house seminar of our building.

The manuscript from our Group by Pietkiewicz et al., "Combinatorial treatment of CD95L and gemcitabine in pancreatic cancer cells induces apoptotic and RIP1-mediated necroptotic cell death network" has been accepted to journal of experimental cell research, congratulations to Sabine!

Our collaborative project with the group of Prof. Dunja Bruder "Morphological and functional alterations of alveolar macrophages in a murine model of chronic inflammatory lung disease" has been accepted for publication in Lung. Congratulations to Sabine!

The manuscript from our Group "Molecular architecture of the DED chains at the DISC: Regulation of procaspase-8 activation by short DED proteins c-FLIP and procaspase-8 prodomain" has been accepted for publication in Cell Death and Differentiation

A team of our group participated successfully in the company running event "Firmenstaffel Magdeburg".

Olga Popik and Evgeny Petrowsky from the Novosibirsk Institute of Cytology and Genetics were giving talks.

Our manuscript "Quantification of apoptosis and necroptosis at the single cell level by a combination of Imaging Flow Cytometry with classical Annexin V/ propidium iodide staining" by Dr. Sabine Pietkiewicz, Jörn Schmidt and Prof. Inna Lavrik is accepted for a special issue on Imaging Flow Cytometry in the Journal of Immunological Methods. Congratulations to Sabine and Jörn!

Our manuscript "Quantification of CD95-induced apoptosis and NF-κB activation at the single cell level" by Jörn Schmidt, Dr. Sabine Pietkiewicz, Prof. Michael Naumann and Prof. Inna Lavrik is accepted for a special issue on Imaging Flow Cytometry in the Journal of Immunological Methods. Congratulations to Jörn and Sabine!

We will participate in this event on May the 30th.

Nikita Ivanisenko from the Novosibirsk Institute of Cytology and Genetics was giving a talk.

Dr. Sabine Pietkiewicz has presented a novel method developed in our lab in the Nature Webcast "A closer look at cell death with imaging flow cytometry"

Olga Saik, PhD student at the Institute of Cytology and Genetics, Novosibirsk, gave a talk with the title "Data-mining in molecular-genetic networks" in our seminar room.

Olga Popik, PhD student at the Institute of Cytology and Genetics, Novosibirsk, gave a talk with the title "Analysis of molecular-genetic networks distributed over intracellular compartments based on protein-protein interactions" in room 027, building 28.

The Department team together with supporters took part in the company run competition: "Firmenstaffel Magdeburg 2014".

We moved to the new system biology building in building 28 / Pfälzer Platz. You can find our new telephone numbers here.